Iron sulfate heptahydrate is a white-green granular powder.
Ferrous sulfate is mainly used as a precursor for making other iron compounds. It is a reducing agent, and as such is useful for the reduction of chromate in cement to less toxic Cr(III) compounds.
Has been used in the textile industry for centuries as a dye fixative. It is used historically to blacken leather and as a constituent of ink.
Ferrous sulfate was used in the manufacture of inks, most notably iron gall ink, which was used from the middle ages until the end of the eighteenth century.

It also finds use in wool dyeing as a mordant. Harewood, a material used in marquetry and parquetry since the 17th century, is also made using ferrous sulfate.
Iron (II) sulfate is sold as ferrous sulfate, a soil amendment for lowering the pH of a high alkaline soil so that plants can access the soil's nutrients.

In horticulture it is used for treating iron chlorosis.
It is also used as a lawn conditioner, and moss killer.
It is used in gold refining to precipitate metallic gold from auric chloride solutions (gold dissolved in solution with aqua regia).

It has been used in the purification of water by flocculation and for phosphate removal in municipal and industrial sewage treatment plants to prevent eutrophication of surface water bodies.

It is used as a traditional method of treating wood panelling on houses, either alone, dissolved in water, or as a component of water-based paint.

Green vitriol or Iron Sulfate is also a useful reagent in the identification of mushrooms.

It is used as the iron catalyst component of Fenton's reagent. 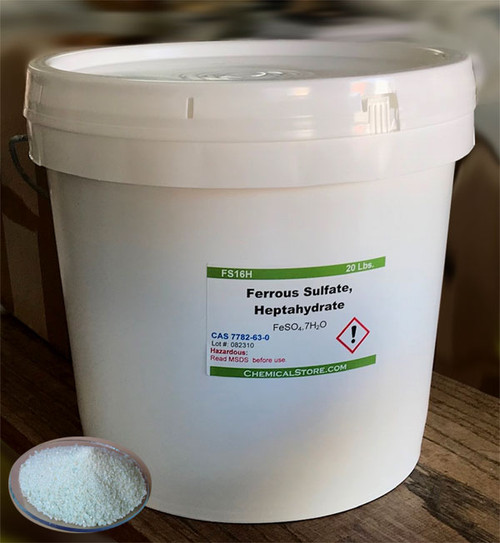